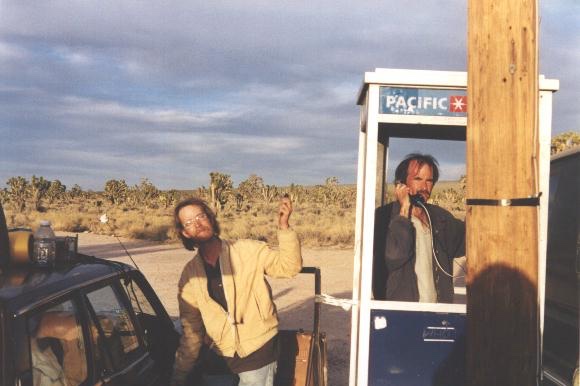 [Before 91.1 KMUD (FM) Garberville (Humboldt County) Calif. went on with a tiny 110 watts around 1991 (I enjoyed them from Westport Union Landing SP in August 1992 whilst camping in a camper-van) - KMUD on shortwave began from a houseboat in southern Marin County.  Later, the ops. changed and the location of KMUD-sw changed to a north Marin location and later into the Mojave Desert, but KMUD-sw is rarely heard today, however there is now a really cool drama play in the UK and Europe remembering the infamous KMUD Mojave Phone Broadcast in the Millennial Year of 2000...]
On the weekend of March 24th to the 26th of 2000, Three intrepid radio-enthusiasts ventured into the Mojave National Preserve and set-up a 20-watt shortwave transmitter (AM) - an old TCS-13 built in 1944, along with a huge battery and an inverter, as well as an end-fed antenna wire.

The three guys at KMUD-shortwave (Ed, Kirk, and Steve) received an ongoing barrage of telephone calls, as the world-famous and remote Mojave Phone Booth constantly rang with callers from around the World to the now defunct telephone number +1 (760) 733-9969.

One of the KMUD dudes (Ed) actually made it onto the Art Bell Show the first evening of their arrival to the Booth, and announced to listeners the upcoming pirate-radio "live-call-in" broadcast they were preparing to do the next evening.

These recordings were made live, before and during the broadcasts, and there are a few recordings of the segment of the Art Bell Show that Ed called into.

You may have seen many internet postings, photos, and have seen a movie about this remote phone booth, but this was the real-deal - KMUD-shortwave.

As this telephone installation employed very lengthy, above-ground telephone steel wires (old-style), it had a tendency to pick-up Earth's "natural VLF radio" signals - we actually heard very faint "whistlers" and lightning-static during the weekend we were there!

You will also be able to hear clips of KMUD-shortwave as heard in two locations in Arizona, by two different DXers on 43M (AM) and 73m (AM/SSB).

Also are recordings of those p-hifer (A1A) desert-beacons from various locations.

In 2003, I obtained about 10 CDrs of KIPM's Studio-releases of Alan Maxwell's excellent and ethereal shows. I ripped them to (128 kbps (FBR) MP3 files, and burned them to CDr. The HDD of the machine I did this on eventually crashed, and I misplaced the CDr of KIPM's studio shows until 28 September 2010. Enjoy.

Also is a show: "Morak - The Thing Behind the Wall" in which I played Morak.

All files on this page public-domain for your enjoyment.

Rights
All files on this page public-domain for your enjoyment.